Panoweaver 8.6 Pro is an automatic panorama stitching software with extensive support for fisheye lenses by Easypano. It can stitch large multi-row panoramas up to full spherical virtual environments. Plus, it has sophisticated masking tools for erasing a tripod and other unwanted elements from panoramic images.

Panoweaver can create standard panoramic images for printing or electronic use. This stitching software includes built-in capabilities to publish interactive panoramas in five different formats: Flash, Java, Quicktime VR, Shockwave and HTML 5. Since version 8, an auto-switching publication method that shows an immersive panorama as HTML 5 on iOS devices and as Flash otherwise was added. Interactive output is highly customizable with background music, context menus and user-defined toolbars. There are two formats for embedding panoramas directly on a website: Java Applet and Flash VR, plus an HTML 5 option for sharing with Apple mobile products.

Panoweaver is available for Windows and Macs in two editions: Pro and Standard. The Pro version is the one tested in this review and, starting at version 8.6, adds the capability to automate the creation, publication and conversion of panoramas. These batch features previously were available from a separate Batch edition. The Standard version also got an upgrade as it now supports both rectilinear and fisheye lenses.

Version 8.5 introduced a Gyroscopic effect in addition to the popular Wee Planet projection which was added at version 8. Wee planets can be output as images, Flash or stand-alone Shockwave files. The rendering and stitching engine has been improved in 8.6 to match features and stitch more accuracy.

Starting Panoweaver 8.6 Pro brings up the application's single interface window with a fixed toolbar and a contextual side-column made of collapsible sections for fine-tuning panoramas. The toolbar shows commonly executed functions while the menu duplicates them and adds a few more. There is no real way to get lost in this application but a little time is needed to get familiar with the icons.

Images are selected using the New Project button and appear in the main window under source images after that. The three icons which appear below the tab give access to different views of source images. The last one of these brings up the control-point view which allows for manual, instead of automatic, stitching. 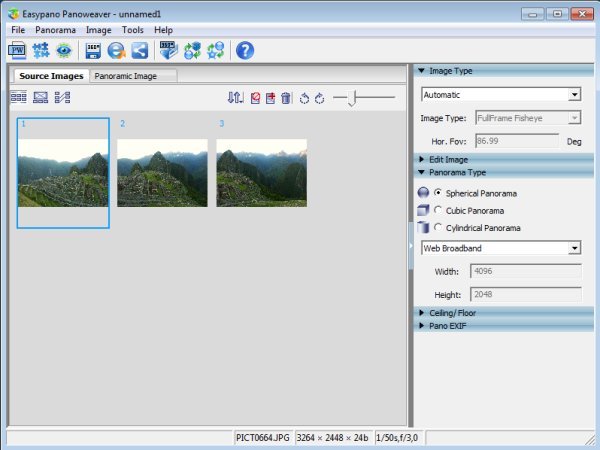 For fully automatic stitching, simply click the Stitch buttonLooks like four puzzle pieces. and wait. This has been immensely improved from version 7 and works very well. Instead of guessing now, Panoweaver prompts for the type of lens if it cannot figure it out from the images. One can also specify parameters by selecting the Custom option from the right column. This lets you specify what type of lenses was used to capture source images: Circular Fisheye, Drum Fisheye, Full-Frame Fisheye, RaynoxA special fisheye lens which sees 185° and enables the capture of a fully spherical environment in only 2 shots. or Wide-Angle/Normal. As you can see, only one choice is rectilinear. The horizontal angle-of-view of a single image can be set there as well.

There are three available panoramic projections: Spherical, Cubic and Cylindrical. Note the absence of Rectilinear. Cubic, the least common option, creates a panorama made of up to 6 images representing the sides of a cube onto which the panorama is projected. This enables the Tripod-Removal function, allowing users to mask a region of the bottom face of the cube. Neatly, one can create a Spherical panorama, convert it to Cubic, remove the tripod and convert it back to Spherical if so desired.

The Panoramic Image tab is where the resulting panorama can be seen. It remains empty until something has been stitched. There are two views within that tab, one shows the entire panorama as a flat image and is used to set crop boundaries. The second view shows the panorama in a virtual environment using OpenGL. This is called the Immersive view and renders the panorama with a natural perspective. It lets the user navigate the environment. Gestures there are reversed compared to panning since the pointer represents the viewing direction. Hence, moving the viewpoint upwards makes the panorama move downwards. 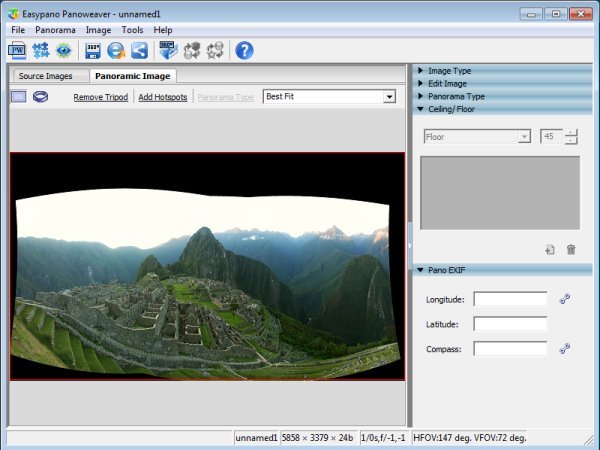 Once a panorama is previewed, there is very little control over the output. The preview is therefore mostly WYSIWYG. The main exceptions are Tripod Removal plus both the Cubic-To-Spherical and Spherical-To-Planet conversions. There are tons of options for publishing panoramas though. Exact options depend on the chosen output format but Panoweaver Pro can actually render all five formats at once. Users can embedded a link directly in panoramas, enable hot-spots and customize size and appearance. Officially, the HTML 5 option works for multiple browsers now but it would not render properly in Chrome.

The Pro version of Panoweaver 8.6 has two blending engines, the standard one and the Strong one. Both are good in terms of output quality but the Strong one is noticeably better, producing crisper results with less variation in sharpness across seams. The spherical projection seems to produce better results than cylindrical and preserves a wider vertical field-of-view while cylindrical truncates a little too much at the base.

Automatic stitching had no problem with the standard 3-image single-row panorama used in our software reviews. Recall that this was not the case for version 7, so a dramatic improvement. Panoweaver Pro 8.6 even handled larger panoramas without crashing but showed more stitching errors than expected. Adding control points manually improved things considerably but spherical panoramas taken with a rectilinear lens never rendered perfectly.

Panoweaver is advertised as being capable of stitching HDR panoramas. Unlike most software boasting this, Panoweaver does it via a stand-alone tool which automatically merges exposure-brackets into HDR images. This tool works reasonably well but offers no control over how the results are tone-mapped. The resulting HDR3 Formats available: OpenEXR, Radiance HDR and Floating-Point TIFF. or tone-mapped4 Formats available: JPG, PNG, TIFF, BMP. images are then supposedOddly, Panoweaver was unable to open the TIFF files which it produced. They were readable from other software though. to be stitched together using the main piece of software.

The performance of Panoweaver is average. For a single 3-image single-row panorama using a cylindrical projection, it took 43 seconds with either stitching methods. Recall that version 8 was faster with Standard and much slower with Strong. The Strong method shows visible improvement in final output quality, particularly in terms of sharpness and details around seems.

Note that there is no way to adjust the horizon and vanishing point of panoramas. Finally, although an HDR panorama could not be created, the included stand-alone HDR Merge Tool produces good quality images with a surprisingly natural tone-mapping.

Panoweaver 8.6 Pro is a capable panorama stitching software with advanced publication capabilities. Version 8.6 is somewhat improved upon its predecessor yet notably more feature-rich, particularly with the arrival of Batch functions. The output quality is good without visible seems showing as long as features are aligned perfectly. In case automatic stitching fails, Panoweaver lets user manually set control-point and position them reasonably precisely.

The newly added Wee-Planet projection is sure to make some people happy too and using it is as simple as can be. In terms of panorama assembly, the feature set is rather basic but Panoweaver compensates for that with detailed control over publication of panoramas in five versatile formats. The Pro version can also publish directly to Facebook.

Panoweaver is available directly from the Easypano website. Choose the version you want: