Microsoft Image Composition Editor, or MS ICE for short, is an automatic panorama stitching application from Microsoft Research. This software can stitch panoramas up to a 360° x 180° field-of-view. It reads JPEG images and a variety of other file formats. Through WIC it can support DNG and some RAW formats with a suitable codec installed. Output formats are extremely flexible and include JPEG, TIFF, BMP, PNG and HD Photo image formats, as well as Silverlight Deep Zoom and publication directly to the PhotoSynth website.

MS ICE is designed for performance and scalability. It can stitch gigapixelOne gigapixel (GP) equals 1000 megapixels (MP). panoramas and claims not to be limited by size. This software comes into two versions, unsurprisingly both are for Windows, one for 64-bit operating systems, the other for 32-bit ones. It applies a number of input corrections automatically, including lens vignetting and exposure blending. MS ICE uses 3D acceleration so a modern video card with accelerated drive is required for interactive features.

Microsoft ICE is pleasantly easy to use. Its straight-forwards interface is contained within a single window. This software sheds a traditional menu-bar for a combined menu and toolbar. The most important item being File->New Panorama and variants, almost every other menu item is redundant with some UI element like the Crop and Orientation tools.

There is also a zoom-slider and fit-to-window button in the toolbar. This is the only part of the interface that does not work entirely well. The slider has set limits with a relative scale that depends on the initial size predicted for the panorama. When modifications are made which make the panorama bigger, such as changing projection type, there is no way to get the panorama to fit in the viewer anymore. The fit-to-window button actually sets the minimum zoom on the scale, so that does not help either. 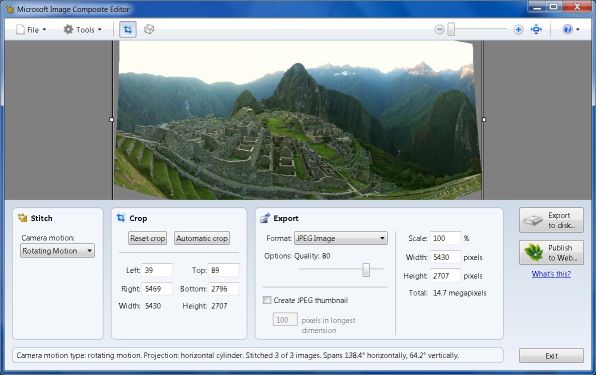 There is a wide preview area which shows an approximation of the panorama in progress. In Crop mode, which is the default, an adjustable rectangular frame controls which section of the image will be rendered. Cropping can also be specified as pixels using entry fields lower in the interface.

The Orientation tool is quite powerful and highly interactive thanks to its 3D graphics implementations. This is really the nicest part of the MS ICE. Particularly, adjustments like these are extremely difficult to make without a real-time preview. While it is called Orientation, this tool can do much more:

Once changes are made in the Orientation tool, pressing the Apply button recomputes the preview since the interactive one is only approximate. To render the panorama, set options in the Export box right below the preview area and click the Export to disk button.This is the point where Microsoft ICE produces the final panorama.

MS ICE produces panoramas of reasonable quality with good preservation of sharpness throughout the frame. Seams are generally well blended. Compared to Autostitch, our baseline for comparison, MS ICE has a higher rate of failure when it comes to correctly stitching details across frames.

Performance of Microsoft ICE is very good. For the 3 x 8 megapixels single-row panorama that took Autostitch 84s and Autopano Giga 40s, MS ICE took 28s, making it exactly 3 times faster than the baseline. Not only is it fast but it also manages memory much better than Autostitch. It managed to successfully stitch a 48 x 16 MP multi-row panorama. Microsoft claims it can stitch much bigger ones.

Microsoft ICE has a highly interactive interface for creating and adjusting automatically-stitched panoramas. This makes it much easier to tweak how the panorama is projected than with most panorama software. Efficiency is a core part of MS ICE which can produce gigapixel images. For smaller panoramas, this software shows very good speed of operation at the expense of stitching quality. The blending algorithm is good but far from perfect as it produces visible discontinuities where other software succeed.

Microsoft ICE is available free of charge from Microsoft Research for Non-Commercial Use only. While this software is Windows only, it has 32-bit and 64-bit native versions. Users of 64-bit operating systems with more than 2 GB of RAM should see a performance benefit from using the 64-bit version.