PTGui is an advanced panorama software with a high level of control over each step of the stitching process. Originally developed as a GUI over the powerful-but-cryptic command-line Panorama Tools, it has evolved into a full-fledge applications for Windows and Mac OS X.

PTGui is capable of stitching multi-row panoramas up to 360° x 180° field-of-view with virtually no limit on resolution and can produce gigapixel panoramas. It also provides automatic compensation for image tilt, vignetting and exposure inconsistencies, making it quite resilient to input issues. It supports the usual 8-bit workflow, plus a 16-bit workflow for improved image quality.

There are two versions of PTGui, the standard one and the Pro version reviewed here. There are no limits on image size and the 16-bit workflow is supported by both versions. Differences between the Pro and standard versions mostly fall into the Batch-Processing or HDR & Exposure-Fusion category. The former is useful feature to producing a high volume of panoramas such as for Time-Lapse photographyContinuous capture of images usually presented as a video sequence.. The latter allows PTGui Pro to automatically detect and perform HDR blendingMerging multiple exposures to create an image with a High-Dynamic-Range. or Exposure-FusionUsing multiple images to produce a Low-Dynamic-Range image of a High-Dynamic-Range scene., saving the need for separate HDR software and allowing the creation of HDR panoramas.

PTGui starts up directly with two windows open. The main window appears with a single tab labeled Project Assistant which provides a fully automatic workflow. One can jump directly to a manual workflow by clicking the aptly-named Advanced button. Regardless of which initial workflow is chosen, PTGui offers complete control over the whole process.

Completing each step makes to corresponding advanced tab appear and fills it with automatically chosen values. This lets the user tweak any parameter and, to some extent, get a better understanding of how the process works. The Load Image phase, for example, enables the Source Images and Mask tabs. The Mask feature is extremely useful for dealing with moving objects and lets the user paint over areas which are to be included or excluded from the panorama. Obviously, such areas have to be in the overlap otherwise there will be discontinuities.

The second window is the Panorama Editor. This where parameters can be interactively modified by manipulating the whole panorama or individual images. The interactive experience varies tremendously depending on the complexity of the panorama. It can range from slightly choppy for a panorama of a few images to excruciatingly slow for a complex one. A number of really useful tools appear in the Panorama Editor toolbar: 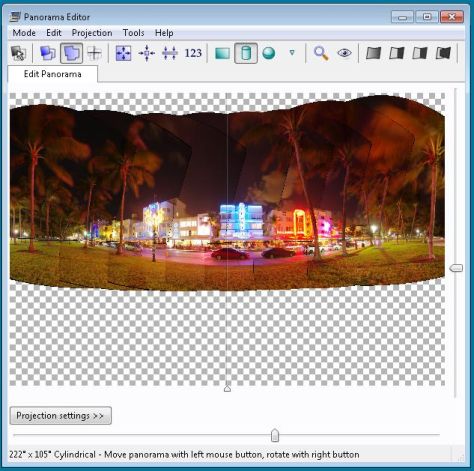 Align Images positions and links them automatically. It is then possible to review and edit control points individually, in case details were not matched correctly. This is also where the Pro version allows Exposure-Fusion and HDR blending to be enabled. The final phase jumps to the Create Panorama tab which allows the usual parameters of size, quality, format and output file to be specified.

PTGui Pro produces high-quality images with excellent sharpness throughout the frame and distinguishes itself by exceptional blending across seams. The automatic stitching is good and works well for the most part. It fails to correctly stitch objects at about the same rate as MS ICE, so slightly behind Autostitch. The main difference is that PTGui allows control-points to be tweaked, so one can improve upon the automatic solution.

The HDR capabilities of PTGui Pro are a great asset. It turns out that most photographers considering HDR would actually prefer Exposure-Fusion which is a lighter process that produces readily usable results since there is no need for tone-mapping. Tone-mapping is the step usually responsible for ruining HDR images. With Exposure-Fusion, tone-mapping is built-in to the algorithm which generally gives natural-looking results. PTGui Pro performs Exposure-Fusion very well, leaving minimal halos and other noticeable artifacts. There are even parameters to tweak parameters specifically for Exposure-Fusion in case a different look is desired.

PTGui Pro can also use HDR images as input and produce an HDR output or perform its own HDR blending to produce an HDR panorama from LDR images. Given the extensive image alignment technology required to stitch panoramic photos, it is unsurprising that PTGui can blend exposure-brackets that are not perfectly aligned, even supporting hand-held shots.

Performance of PTGui Pro is rather good. For the 3 x 8 MP sample panorama used in previous reviews, it took 40s, matching Autopano Giga and only leaving MS ICE faster than it. Larger panoramas take a toll on performance as the complexity increases dramatically. Giving PTGui a 50X larger panorama took 4 hours instead. If it scaled linearly, it should have taken about 30 minutes.

PTGui Pro provides very good output quality and a huge amount of control over the stitching process. While there is a moderately easy to follow automatic workflow, true beginners may find it somewhat overwhelming. On the other hand, users willing to take control of their panoramas will greatly benefit from PTGui's transparency. Since the automatic workflow drives the process, setting parameters as it goes, it becomes easy to experiment tweaking parts of the process.

Both output quality and speed of operation are really good. PTGui Pro really stands out by its blending algorithm which maintains excellent sharpness along seams and renders them invisible. Built-in Exposure-Fusion is a great bonus as well, providing an all-in-one workflow for creating panoramic photos of high-contrast scenes. All in all, this product will certainly appeal users who take the time to perfect their panoramas and demands high-quality rendering.

PTGui is available for both Windows and Mac directly from the publisher's website. The binaries provided natively support 32-bit and 64-bit operating systems.